"I'll remove the cause, but not the symptom."


If you're looking for information about assessing saddle fit, you can find tons of it on the Internet.  From medical research papers to blogs like mine, information abounds.  And for the most part, it all agrees on the major points:  the saddle should spread the rider's weight evenly over a sufficiently large bearing surface while keeping the horse (and ideally, the rider) as comfortable as possible so s/he can perform to the best of his or her ability.  But when it comes to the method(s) used to assess fit ... well, there are a LOT of them, from computerized high-tech imaging to low-tech human hands-on.  And how good are they?  Let's take a look.

Veterinary diagnostics have improved by leaps and bounds in the last decade or so, and some of these diagnostics are now used in assessing saddle fit - thermography, in particular.  Thermographic images show heat - blue areas are cool, shading to red, which is hot, to white, which is hottest (note the handy-dandy scale on the right of the image).  Heat can translate as pressure when it comes to saddle fitting: 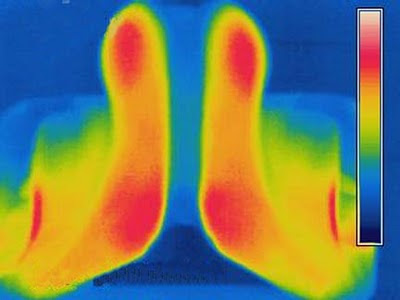 Given the pattern here, it would be reasonable to think the saddle might be bridging; it's also showing pressure further forward on the right than the left. 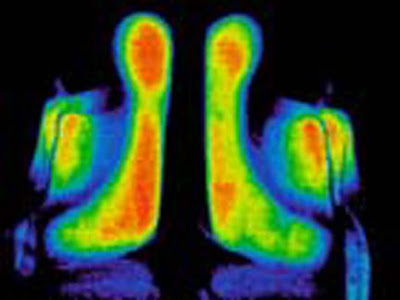 The image above is showing a lot more pressure on the left panel than the right, with some bridging on the right as well. 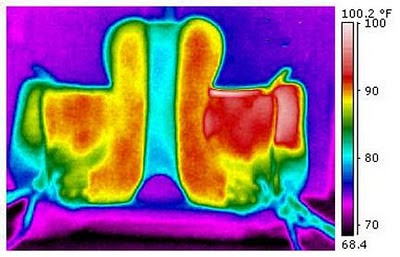 This image is showing more pressure on the right, with some serious heat/pressure down the rear of the right flap.

And just for comparision, here's a thermographic image of a horse's back.  This image isn't saddle related, but it shows some heat along the spine, which would be consistent with a problem like kissing spine: 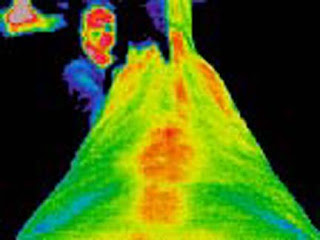 The Pliance system is another computerized method of measuring pressure.  You can find out more here (the site is sadly rather incomplete).  This method looks sort of like "thermography in motion", it's basically a pad that measures pressure while the horse saddled and working with the rider up.


Another popular device to assess fit is the Port Lewis Impression Pad (lots of info here, and photos of the pad showing pressure spots here).  It's a plastic pad that's filled with a clay-like substance used to make dental impressions; you use it in place of a regular saddle pad, and the dental clay moves away from areas of pressure.

In the first photo, the bridging shown could be a saddle fit issue,.  It could also come from a horse who's traveling inverted rather than lifting his/her back ... and that could be happening because of a saddle fitting issue, a training issue, or a rider issue.  The pressure showing further forward on the right could be a saddle issue ... or it could be that the horse is muscled asymmetrically, or it could mean that there's a gait / soundness issue.  Equally possible is that the rider is sitting with one hip further forward than the other and is causing the saddle to twist.

The second photo - heavy pressure on the left, a little pressure and some bridging on the right.  Could be a saddle issue - perhaps the panels aren't flocked evenly ... or it could be an asymmetrical horse, or a rider who sits more heavily on the left seatbone.

The third photo could be caused by any of the issues mentioned above, but the high level of heat showing on the rear of the right flap makes me curious.  Does the horse have a physical issue - broken rib, perhaps? - or does the rider have a vise-like right leg?

The Pliance system - what little info I can find on it - seems to have the same drawback as thermography:  it shows the symptom but not the cause.

That sort of whittles it down to the old low-tech, get-the-saddle-fitter-involved method.  Sometimes we'll consult with your vet, and some use the Impression pad, but it's pretty universal that we'll take a look at the saddle, feel around, watch you ride (unless the saddle is such a glaringly bad fit that we don't want you to bother mounting, or your horse is really backsore), feel around again, look at your horse's back, and determine not only where the pressure is, but what's causing it.  Sometimes it will be a quick fix:  a flocking adjustment, or a tree width adjustment.  And sometimes, you'll get input that you may not really want to hear - you might need a new saddle, you might need to do some serious work on your riding and body use, your horse might need some remedial training ... or you might need to get your vet out, because it doesn't look like it's the saddle, after all.
Posted by saddlefitter at Friday, December 18, 2009

Doing the detective work to find the "why" is this happening is the art form of saddle fitting. At least, that's the way I think. The more I learn, the more I understand that it is seldom a simple yes or no but a series of a bit of this and a bit of that. Val

While I appreciate the concept of a pad that helps assess the way a saddle fits with a rider on board and the horse in motion, my mare absolutely hated the way the Port Lewis Impression Pad felt under her saddle. I think the unfamiliar, somewhat heavy and stiff "plastic-y" feel of the pad was what she objected to, or possibly the straps that held both sides of the pad together.

I'd like to see a pressure-testing pad design that felt more like a regular saddle pad, for those of us with sensitive horses.