Such a Deal (Listen to Bob)

Value:  the monetary worth of something: relative worth, utility, or importance - www.merriam-webster.com

Good saddles aren't cheap.  And cheap saddles are rarely good.  However, since the economy's in the crapper, many people are thinking long and hard before they plunk down a considerable chunk of change on a saddle.  I empathize entirely; making ends meet is tough, and discretionary income seems to be going the way of the dinosaur.  But with that in mind, I do urge my customers to invest in the best they can possibly afford without rupturing the budget, for three reasons:


#1)  Better quality.  As a rule of thumb, you get what you pay for.  I'm not saying that you have to go out and spend $7000 - frankly, I get a good chuckle out of the people who hoist their snoots in the air because their saddle costs more than my family's monthly living expenses - but I do know that spending $2800 on a new saddle will pretty much guarantee that it will be of superior quality and workmanship than a spandy-new $400 saddle (especially if we're talking about a spandy-new $400 leather saddle).


#2)  Better resale.  Saddle prices don't go down, and most people are pleasantly surprised to find that the saddle they spent $2500 on a few years ago (and that they have maintained well) can be sold with only a few hundred dollars' loss.


#3)  Real value.  As Ma used to say, there are people out there who will "step over a dollar to pick up a dime", meaning that they'll snap up what seems to be a good deal without considering the long-term possibilities.  Here's a little vignette to illustrate.


Bob is an appendix Quarter horse who harks back to the Thoroughbred in build and the Quarter horse in temperament.  He's a rangy guy with a biggish wither and a dropped back: 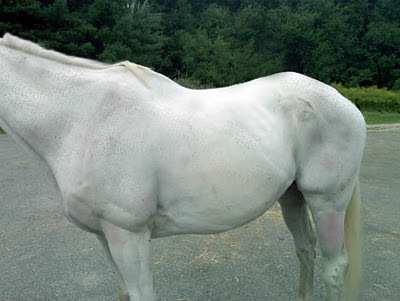 so very true. hope they both recover from the experience....

Damn Kitt, you have such a great way with words. Time for a book !

Poor Bob and poor owner, I hope he turns back in to his amenable self once you have found them the perfect saddle.

You may have mentioned this before, is there anything you can do to help a horse that needs a deep gusset in front or a K panel, who doesn't actually have a saddle with either of those features? I guess I am asking if Bob's saddle was wide enough could something have been done temporarily with a pad?

Next thing the customer needs to do after the Albion purchase is TRAINER SHOPPING! I hope she realizes that. p.s. poor Bob and poor customer : (

I really feel badly for the owner and for Bob. Thank goodness the owner did not blame Bob for the ultimate blowup.

I am sickened by the trainer's incompetence. People put their trust and money into professionals and get taken for a ride, but not the kind they were hoping for.

It's almost too bad the trainer wasn't the one Bob went nuclear with. Surely though, he would have gotten the snot beaten out of him for it by said trainer.

I hope both Bob and his owner recover and spend many happy days together enjoying the fit of the Albion. With a different and better trainer of course.

I SOOO needed to read this post. My horse and I are in the same situation as Bob and his owner (minus the numb-nut trainer). My gelding has a sore back. He has had poorly fitting saddles all of his life. He has been bullied and beat on. I'm too cheap and my budget is too tight. I needed to read this post as it really clarifies the importance of a fitting saddle. I am sending in wither tracings, etc asp (and I just hope that I can accurately do them) and in the mean time, my gelding will have a break from riding. Don't know whether to send in my old Kieffer for reflocking and fit assessment based on wither tracings, or consider something new. I don't trust my judgement anymore. I NEED you closer to me. Consider moving to Iowa. Your secret admirer, Erin (aka, teacher at Zion-St. John Lutheran School)

I have developed a very simple theory on the customer/budget side of saddle fitting. If you have NONE of these factors in play you are going to have a fairly easy time getting a saddle - ramp it up to all three, which covers most of my potential customers, and you have a nightmare on your hands.

1. Difficult to fit horse or rider
2. Low budget
3. Unable to wait for solution

If you have all three, pucker up and be prepared to spank the plastic - good saddles which offer a variety of fitting options have to be bought new and are expensive. Horses are not a cheap hobby. I have plenty of grateful clients who have spent more on their saddle than they spent on the horse.

Great post Kitt and sorry I missed it till now!

I read this post and I laughed & cried. I don't know how many times I go to a barn to do a saddle fit and the client tells me that the trainer feels my suggestion was not the right saddle. I have had clients buy a saddle then call me to come out and look at it, then get offended when I say it doesn't fit horse or rider.