Writing is a very organic and uncertain activity.  You start out with a specific story in mind, but half-way through, you find that the story (or post, or article) has gone haring off on its own down a path that you never meant to walk.  Sometimes those bits of writing get shelved and pulled out later (I have quite a few of those), sometimes you hit the "delete" button, and sometimes you follow the path just to see where it will lead.  This blog has turned out to be one of those "follow the path" things.

When I started this blog, it was something of an experiment in using social media as "free advertising" for the tack shop.  It's worked pretty well - turns out that it's consistently one of the top portals to the shop's website.  It's also grown into something more, though.  I truly enjoy writing it, and it's been received far better than I'd ever expected.  It's given me a chance to get some education about saddle fitting to the general horse public, it's allowed me to give a leg-up to some friends and colleagues, and it's given me an outlet for the frustration and silliness I encounter on a regular basis.  It's also led me to being asked to write articles and do interviews ... which I find amazing.  Who'da thunk a cranky half-a-century-old saddlefitting broad living in the booniewhacks of VT would have input and info that the general horse public would find interesting?!  It's all very, very cool, and I thank each and every one of you from the heart.

Given that this is the last day of 2011, I thought it might be fun to throw out some random things.  Two are flat-out brags, and the rest are things that never seemed to quite fit into any specific post.  First, I'm going to get the brags over with.

Here's the cover of the TrailBlazer magazine that features my "To Shim or Not To Shim" article: 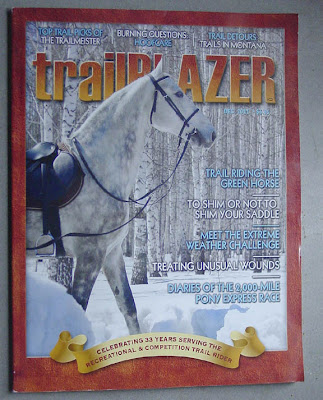 All glossy and shiny and makes me go "wooooooo ...."

The frontspiece of the article: 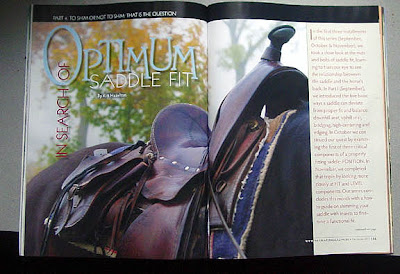 Second brag.  I have been invited to the London opening of the movie War Horse: 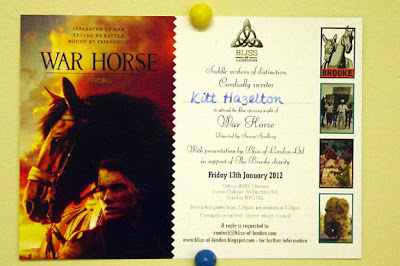 My work space at the shop is a bit on the cold side.  We're up on top of a barn, and the walls in my office are NOT well-insulated.  I do tend to like lower temps (when people remark on the chilliness, I tell them that old meat needs to be refrigerated) and dress in layers to help deal with the occasional hot flash ... so the outer layer in the winter months is almost always polar fleece.  It's warm, it's lightweight, it breathes ... and it's probably not the smartest choice for someone who plays with sheep fur (or at least navy blue polar fleece when the sheep fur is white): 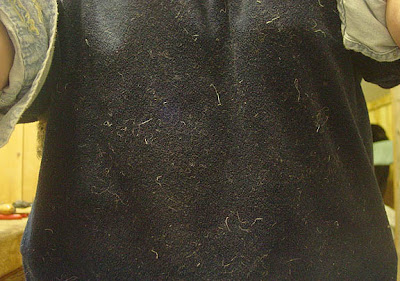 Got a six year old saddle in last week for a strip flock.  Not only was it incredibly dirty (I mean, you really need to work to get dirt jockeys on the panels), it had never had the flocking touched, and it had been ridden in jeans.  Here's what happens to your saddle's seat when your ride in jeans: 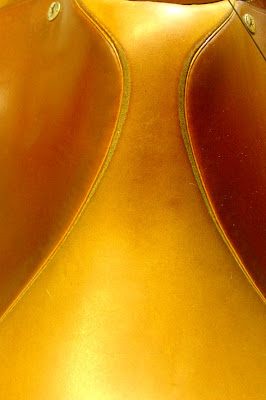 Close-up view.  The hair-side finish has been worn completely away and you can see the skin side.  A year or so more of riding in jeans, and the saddle's owner will be looking at a $600 re-seat. 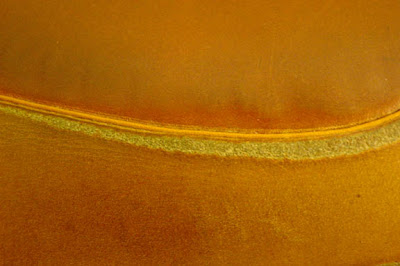 When you flock a saddle, you tend to work with small pieces of wool, maybe 6" or so long, but not much bigger.  Big chunks of wool don't lie in well; they wad up and leave gaps and divots.  I've pulled some pretty impressive pieces out, but these are the record holders - the longest is about 31" long.  I call them The Scalps of Mine Enemies. 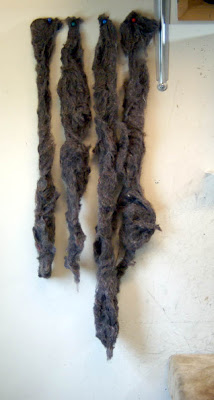 So what's up for 2012?  Well, going to get the mare back in shape and under saddle (and it will have to be a new saddle; the middle-aged spread she's developed can't be encompassed by anything other than a hoop tree ... so I'll have to say goodbye to my Passier GG).  Also going to have shiai (test) in karate to get the second stripe on my brown belt.  And finally, I'm working on the syllabus for an Intro to Saddle Fitting course.  I want to gear it specifically to prep students for Mike Scott's saddle fitting course, and also make it comprehensive enough to offer a good basic education for an individual's personal use.  It'll be a 2-day weekend course ... more on that when I'm further along in the organizational process.

Anyway, here's wishing all of you a happy and safe New Year - and as always, thanks for reading.
Posted by saddlefitter at Saturday, December 31, 2011

I have learned a great deal from your blog and always feel a rise of excitement when you post a new informative piece. I am fascinated and hope to arm myself with information for the next time someone asks the million dollar question, "Does this fit him, okay?"

Congrats on the lovely article and the invitation. If you can see the puppet play while in London as well, go for it! Seriously. I loved it.

I think it's a shame you're in VT, not UK, LOL. are you not going to be able to get over to London?

Thanks for the kind words, guys. Val, my bud Nikki Newcombe saw the play, and said it was absolutely amazing. And Claire, I'm afraid I won't be able to get to London, though I would love to.

I've seen it said before - Don't ride in jeans, it wrecks the saddle! I have a brand new Buena Vista and while it doesn't have the seams in the same places as an English saddle, I still don't want to wreck the leather. What sorts of pants/fabrics are better? Back when I did lots of 25 milers (plus conditioning), I wore riding tights - I'd like to get away from them if possible.

I love your blog and am happy to read that you are having fun with it too!

Trailpal, thanks for the kind words - glad you enjoy the blog! If you want to avoid riding tights, regular breeches would be fine - they come in a plethora of different designs now. You can also find "riding jeans" or saddle seat breeches (Google search will turn up tons) that don't have an inside seam.

The View From My Saddle said...

Wish you had a subscribe to this blog slot on your wonderful blog, Kris.