I Can't Bring Back the Dead

In the 10 years that I've been doing tack repair, I've tackled some saddles that were pretty close to their last gasp. In a lot of those cases, the repairs have cost more than the saddles were actually worth - and I've told the owners so. But often it was a case of sentimental value: someone's first saddle, or one that they've had and ridden in for years, or one that was a gift from someone long dead. And I'm a wicked sucker for that sort of thing - I'll freely admit that I still have my first saddle and bridle (a red western pony-size set with brass tacks), as well as my old western saddle, and my mom's western tack. When it comes to horses and their paraphernalia, I'm nothing if not sentimental.


However, I know when I've met my match. I'm flabbergasted that someone thought this saddle was salvageable - though at first, it didn't look too bad: 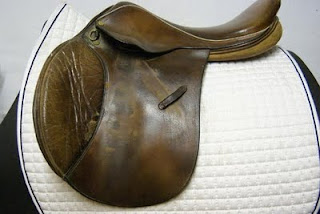 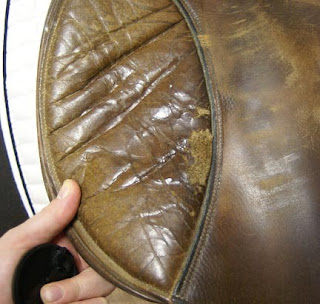 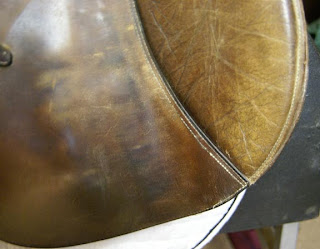 A patch on the knee pad, and a few stitches on the flap. No biggie.

Then I looked at the front: 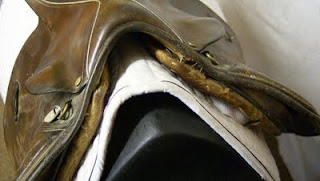 The panels needed to be sewn back on - again, not a huge deal. But then I saw the condition of the front of the panels: 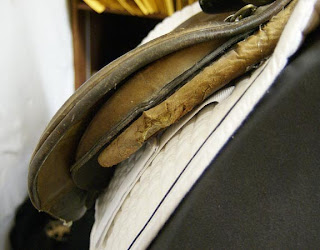 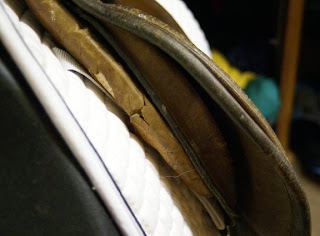 And then I turned it over: 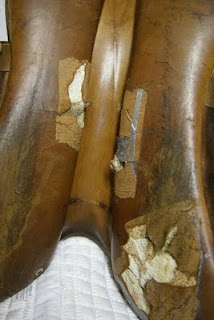 Yep, that's the foam inside the panels that you're seeing. Obviously, someone decided duct tape would be a good fix. 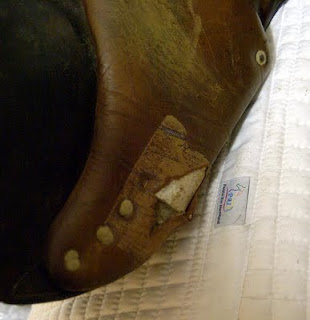 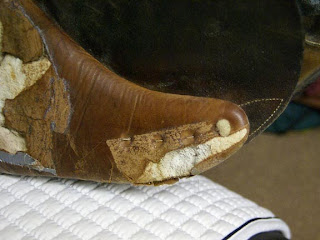 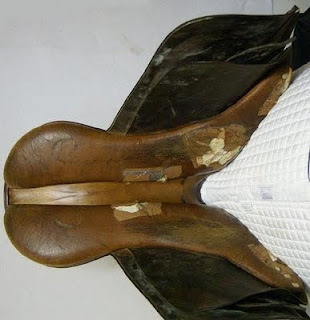 Obviously, this was one for the trash can. There's a lot I can do - but resurrection is beyond me!
Posted by saddlefitter at Friday, August 21, 2009 7 comments:

I finally finished the repairs on the exercise saddle. It was a bit of trial-and-error, since I've never encountered anything quite like this. I wanted a sturdy repair, given that the area that needed repair will be taking a beating from the stirrup leathers and rider's boots. The flap leather wasn't in the best of shape, and a small patch seemed too fragile. I scratched my head, measured and cut, tried and discarded a couple of ideas, and finally decided that I ought to just cover the entire bottom of the flaps: 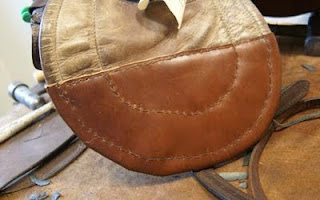 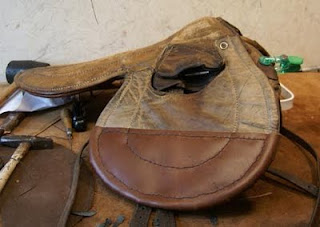 I cut the patches and skived the edges; then cut Vs in the bottom edge of the patch so I could bend it around the bottom of the flap evenly. I glued the patch to the saddle, clamped it, and left it to dry. Then, I started sewing. I followed the original stitch lines, but skipped every other stitch in an effort to stress the leather as little as possible (lots of little stitches means lots of closely-spaced holes, which isn't a good idea when the leather's compromised ... which this leather definitely was!). The existing seams were a bit uneven, which translated into the stitch lines being a little crooked, but I kept telling myself that function was the important thing here(as much as it galled my rather obsessive-compulsive soul).
Next, I cut patches for the panels, skived the edges, and glued them on. No stitches, since I didn't want to sew all the way through the panels, and the panel leather was too tired to tolerate them (if you look closely at the underside of the flaps, you can see the V notches I cut): 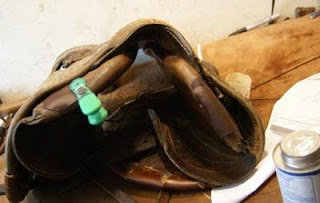 The saddle went home this past Monday night, hopefully to have at least a few more months of exercise rides. If there are any more problems, however, the owner really needs to invest in a new saddle.
Posted by saddlefitter at Friday, August 21, 2009 No comments:

The Horse Gods Must be Crazy (Singing the FedEx Blues)

A little switch from the topic of saddles and fitting to the topic of breeding my mare Lyric. Or perhaps I should say, "TRYING to breed my mare." I started doing this blog to discuss saddle fitting, and don't intend to turn it into a venue to air personal grievances ... but this is a rather extraordinary case, and perhaps someone can learn from my experience, and avoid a similar mishap.

First, a little background: I'm trying to get Lyric bred to Devon Heir, who stands at DG Bar Ranch out in Hanford, CA (more info on the ranch and the stud at http://www.dgbarranch.com/default.htm.). They collect Monday, Wednesday and Friday; semen shipment request has to be faxed in the day before. (We're really lucky there, since we can ultrasound early-early in the morning here and, due to the three hour time difference, still have time to fax the request to the ranch office in CA).

This has been in the works for 2 years now. Last year, being a complete neophyte in the AI breeding scene, I started the process way later in the season than I should have (reason being I didn't want Lyric to foal during Vermont's epic mud season, when the muck here in Sandgate is often a foot deep). My only experience with breeding has been live cover, which has always been very effective and expeditious, and I had no clue just how much time and effort (and money - did I mention money?) is involved in AI, particularly if you have to chemically manipulate a mare's cycles.

Anyway, our first attempt at breeding was foiled by an evil fax machine that didn't transmit the semen request form. Second attempt was shot down by the Fourth of July weekend, when it wasn't possible to ship. The third attempt went off without a hitch, but it was too late in the season - apparently, we'd caught Lyric in transition, and she didn't take.

And this year ... ah, just let me say that I'm beginning to think the Horse Gods just might be telling me something ...

We started the process a little earlier this year, but not so early that mud season should have been a concern. We went the Regumate / Lutylase route again, and had her set to go. I faxed the semen request form, and received confirmation of receipt and shipment and a FedEx tracking number from Liz, the stud manager at DG Bar. I even alerted Wayside, our local country store, where Fed Ex sometimes drops packages if our road is iffy (not that it was, but just in case ...), and asked them to tell the driver to bring the Equitainer to me if he tried to leave it there. Then I started tracking the package on the FedEx tracking page.

Fast forward to the next day. No shipment by noon, but the FedEx tracking page had said delivery should be here by 3:30, so I wasn't worried. Our Internet connection crapped out shortly after noon, but I called the Fed Ex automated tracking system, which said the package was scheduled for delivery by 4:30.

At 4:15, I called Wayside to see if FedEx had snuck the Equitainer in. The person at Wayside told me she's asked the FedEx driver about it, and he'd said there was no package for me.

I called FedEx immediately and raised absolute hell until I got a live person on the phone. According to the representative, there was a "problem" with the package, and it was still sitting in Memphis, which is the hub between CA and VT - it was NOT on its way to me. The plane my Equitainer was sitting on - sitting on, waiting for delivery - was over weight ... so my Equitainer got bumped. A medical vaccutainer with "RUSH - LIVE BIOLOGICAL MATERIAL" and a Priority Overnight shipping label plastered on it got bumped. I wonder what sort of important stuff was delivered instead? Someone's duffel bag? Designer shoes? Shrunken head? (In case you couldn't tell, I'm kinda bitter about this ...)

Needless to say, when the Equitainer arrived 24 hrs. late, Lyric had already ovulated, and the shipment was useless. I flied a claim with FedEx, and was credited the shipping costs; DG Bar very kindly didn't charge me the collection fee, so I filed this under "Stuff Happens" and went ahead.

Second attempt failed - Lyric ovulated much sooner than expected - over the weekend, to be exact. So we short-cycled her again. I gave her the hCG last night a little after 9 (for those not embroiled in this breeding journey, that's human chorionic gonadotrophin, and it brings about ovulation roughly 24-36 hrs. after injection. Last time we gave it, Lyric ovulated in just about 24 hrs.). I checked the tracking on the Equitainer - it was in transit from CA - and went to bed.

This morning I checked the tracking on-line again, and things looked ok. But just to be sure, I called ... I mean, lightning doesn't strike twice, right? The first delayed delivery was just a fluke, right?

WRONG. History did indeed repeat itself: my Equitainer is still sitting in Memphis. This time, the flight from CA to Memphis had been delayed for some reason, and my Equitainer didn't reach Memphis in time for sorting ... I'm now waiting to hear if there's any way to get the Equitainer anywhere near me - Albany, NY is my "local" hub, and it's about an hour and a half from me - but if they can get it there today, I'll go pick it up.

First lesson learned: if you absolutely, positively must have the shipment on time (and thanks to a very nice, sympathetic and informative representative at FedEx for this info), set up your own shipping account with FedEx, and have it shipped on that account. This creates a contract with FedEx, and if the shipment doesn't arrive on time, you can make a claim not only for the value of the contents and the shipping, but also for "Consequential Damage". (Not sure they'd pay out what a well-bred Hanoverian foal would have been worth, but ...) As it stands now, their contract was with the shipper (DG Bar Ranch), so I can only be reimbursed for the shipping and the value of the contents - which, since value was undeclared, is $100.

I do have to give lots of credit to the Fed Ex reps I've spoken with. I have not been a pleasant or reasonable person about all this (and to my credit, I've apologized for my behavior - not their fault, after all, but dammit, I had to yell at someone), and they've been unfailingly calm, kind and helpful. Thanks also to Liz and everyone at DG Bar for all their professionalism and help.

I just got off the phone with Fed Ex. There are no flights coming in to Albany this afternoon, so no hope of getting the shipment before tomorrow. Again, too late. Fortunately (or unfortunately, depending on your point of view), I will not home to bite the Fed Ex man when my shipment actually arrives. My husband (who is far more civilized and detatched about this than I) will just refuse the shipment.

Second lesson learned: if you absolutely, positively must have it overnight ... use UPS!
Posted by saddlefitter at Tuesday, August 11, 2009 7 comments: