"Like a Box of Chocolates" Part II - All the Pretty Flocking

As I've said before, one of the best things about my job is that I'm never quite sure what will be waiting for me on my bench when I arrive at the shop.  Often, it's a saddle with some serious visual impact:  the exercise saddle that needed the "repairs" repaired, or the elderly unit with duct tape on the panels and the note, "Can you fix this?".

And sometimes, things start out so very, very run-of-the-mill, just-another-day-at-the-bench ...

About a week ago, I received an older Theo Sommer all-purpose saddle for a strip flock and C&C (cleaning and conditioning all the nooks and crannies while I have the saddle apart).  The saddle showed its age somewhat (turns out it's about 23 years old); the leather was a bit fragile and the flocking was relatively lumpy, but it had been meticulously maintained and the entire C&C took less time than scrubbing the dirt jockeys off the flaps of some saddles I've worked on ... Anyway, this saddle was so spectacularly unspectacular that I didn't even take photos ... until I started removing the flocking.

I dropped the panels and stuck my hook in one of the flocking holes, and pulled out: 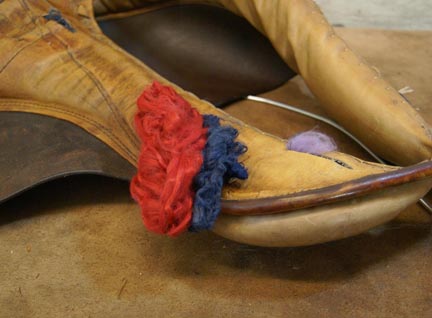 Crimson, navy and lavender, oh my!

I've pulled some multi-colored wool out of some old Stubbens and Passiers (much of the wool used "back in the day" in these saddles was remnant stuff from the garment and upholstery industries, so the mix was quite colorful and sometimes even included some metallic stuff), but large masses of solid, bright colors was something entirely new.  So I kept pulling: 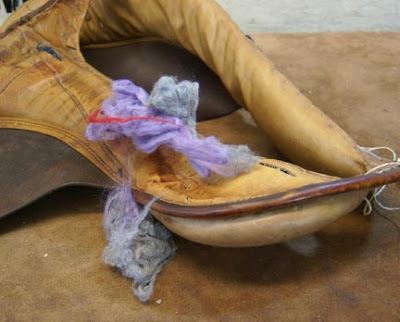 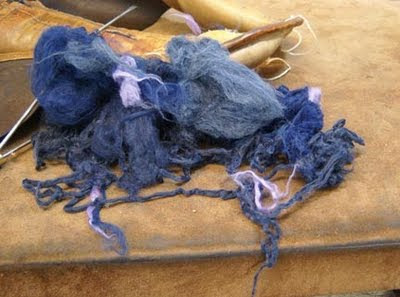 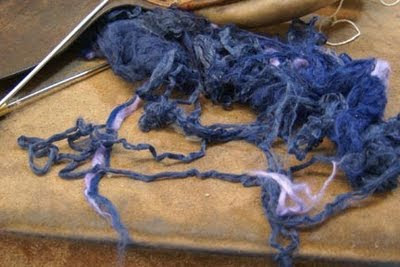 Yes, that IS yarn mixed in there.  And curiosity led me to do the fire test to find out if it was wool or synthetic.  When I touched the flame to the end of one piece, it went up as though it had been soaked in gasoline - almost scorched my fingers - and had that "Burning Barbies" stench.  DEFINITELY synthetic! 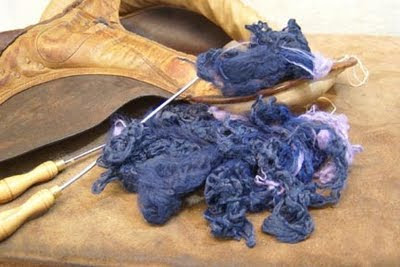 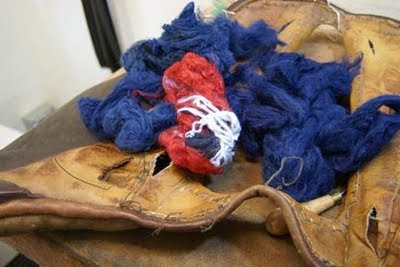 The saddle showed no signs of having been worked on before, so I'm guessing that this is the original flocking.  While I've never heard of using yarn and would not have thought it worth much as flocking, I have to say that the panels were no lumpier than I'd have expected if the saddle had been flocked with plain old wool (particularly given the age of the saddle and the use it had obviously seen).

It's going to be a long time before I'm once again blasé about what I might find when I do a strip flock ...
Posted by saddlefitter at Tuesday, November 24, 2009 4 comments:

From the Tree Up: Sub-topic - Adjustable Trees and Changeable Gullets

Please note that this post is not intended to bash, slander, bad-mouth, short-sell or otherwise denegrate  saddles with adjustable trees or changeable gullets. When used as intended, they can fill spots that other saddles don't, and - in some cases - offer far better quality than fixed-tree saddles costing about the same.  Lately, however, I've been running into quite a few folks who have some rather serious misperceptions about these saddles, and I'd like to make an effort to correct them.