"I'll remove the cause, but not the symptom."

One of the most constant pieces of advice I seem to give people is, "Find a reputable fitter in your area, and have them come out and take a look/do the adjustment/give you some input."  Hands-on fitting is the optimal way to go - you can do a fitting assessment or see many adjustments that need to be made via photos, and bumping a saddle back up to factory spec is pretty simple - but particularly for more complex fitting issues, having a knowledgeable fitter there in person is the best way to insure correct fit.

I have dispensed this advice for as long as I've been fitting saddles, and I think it's pretty darn sound advice ... but someone recently threw me a curve.  "What I want to know, " this person asked, "is how to find someone who knows their stuff?  And how do I know that they know their stuff?"

And that, dear readers, is a damn good question.

First, merely finding a fitter can be a fairly daunting task.  We're really pretty thin on the ground.  There are lists of fitters on the Society of Master Saddlers' website here, and on the Master Saddlers Association website here; some saddle companies list their fitters on their web sites, or their reps / retailers are fitters.  And I'm after Mike Scott to put a list of his fitting course's graduates on his web site, too.  But as I've written before (in "For the First-Time Horse Owner" wa-a-a-a-a-y back in Jan.), not all certified fitters are good, and not all good fitters are certified.  Certification is only as good as the organization offering it - some courses are outstanding, and some are little more than "how to sell our saddle" tutorials aimed at a company's reps.  Of course, so much depends on how the individual fitter uses the education offered - you can put forth the best, most comprehensive information available, but how and if someone assimilates and applies the knowledge is key.

So, if certification isn't really a reliable measure, how do you find a good fitter?  In my experience, word of mouth is a pretty good indicator.  Check with veterinarians, with chiropractors, massage therapists, tack shop and barn owners, and other riders. Most people are more than happy to share their opinions.  If the overwhelming majority of people like or dislike someone, there's usually a pretty good reason.  I know some outstanding saddlers/fitters whose only certification comes from years of successful business and glowing recommendations from their customers, and I know some fitters who have multiple certifications and not much in the way of street cred.  The reverse is true, too.

Another thing to consider is your gut reaction.  No matter how highly recommended a fitter is, if there's something about him/her that you just don't like (even if it's something as basic as the attitude with which they walk into the barn), it may not be a good mix.  Personality does come into the mix with fitters, as it does with your trainer, vet or farrier.  I'm not saying you'll always agree with everything a fitter says, and s/he may make some suggestions that seem a little unusual (I've had times when clients have looked at me as though I'd grown another head), but if the overall feeling isn't a good one, you might want to consider it a learning experience and just move on to someone else.

In addition to reputation and personality, here's a list of things that I think are important to consider when you're choosing a fitter:

1)  Does the fitter listen to my input?  Does s/he take time to get a history of the saddles I've tried, and the fitting issues my horse and I have encountered?

2)  Does the fitter ask if my horse is or has been experiencing any soundness issues?

3)  Does the fitter pay attention to my horse's reaction?

4)  Is the fitter willing to see if my existing saddle can be made to work, or is s/he immediately telling me I need a new one?

5)  If I do need (or want) a new saddle, what options is the fitter offering?  Am I being pushed toward only one brand, or am I being given a choice?

6)  If I'm trying a new saddle but don't feel comfortable in it, or feel it's not fitting my horse well, does the fitter take that into consideration?

7) (And this is my biggest peeve.)  Is the fitter telling me that the XYZ saddle company makes a saddle that will suit every horse and rider in the world?

As I said before, you won't get on with every fitter out there, and you may have to go through a bit of trial-and-error.  But if you can find someone who'll listen to you and take the time to make sure that you and your horse are comfortable and happy, it will be worth the search.

But It Doesn't FIT!

While we're talking about saddle construction, we're going to take a small side-trip here. This issue is one that just showed up on my radar recently, and I suppose I could save it for later, but I'm finding that writing while the idea is fresh usually results in a better entry.

I'm once again tapping into a subject I found on one of the bigger bulletin boards.  It's a tale of woe, of anticipation and longing and a wish that didn't come true - and it's a tale that could have had a reasonably happy (or at least not totally tragic) ending ... but didn't.

Someone (let's be really original and call her "someone") ordered a saddle for her horse - had the fitter out, had the measurements done, ordered the deluxe fancy leather / air panels / contrasting seat welting / bells and whistles Princess version once-in-a-lifetime saddle ... really shot the wad to the tune of about $5000.

Fast forward about 6 months, to the arrival of the long anticipated saddle.  Not only was the saddle conspicuously minus many of the bells and whistles and Princess accessories "someone" had ordered ... it did not fit.

This is a pretty sad story in and of itself.  But wait, it gets sadder:  according to "someone", the fitter adjusted flocking, adjusted the seat, and did everything but stand on his/her head and whistle a tune while drinking cider through a straw ... and the fitter could not make the saddle fit.

Sadder yet:  the fitter then tried to blame the bad fit on "someone" (even went so far as to infer that "someone" had packed on some poundage) and her horse.

The denouement?  No refund.  Too bad, so sad, but the saddle was "someone's" ... lacking bells, whistles and Princess accessories, AND not fitting either horse or rider.  Eventually, "someone" did get the fitter to take the saddle back, but was still charged a 20% restocking fee (which, as any mathmatically gifted person can tell you, comes to a cool $1000).

Admittedly, I only have "someone's" side of this whole story ... but I gotta think, if "someone" is upset enough to air this whole experience on one of the major equine bulletin boards, something had to have gone wrong - and probably quite drastically so.  So, while we may never know just who fell down, or where, here are some possibilities:

1) The Saddler Messed Up. It does happen - I mean, we're talking about a hand-crafted item here, and as statistician Marge N. Uverror will tell you, human beings are fallible. But usually, if the saddler messes up, it's only one thing - sometimes one very big thing, like the wrong color or the wrong tree - but it's rare that the whole saddle is a fiasco. In the roughly 10 years we've been ordering saddles to template, we've only had a handful of "mistakes" come through.  And each time, the saddle company has stepped up and made things right.

2) The Fitter Messed Up. This happens, too - again, human fallibility.  And to be brutally honest, the fitter probably messes up more frequently than the saddler. Fitters are out there taking templates and photos, measuring the rider, writing orders, noting modifications ... basically getting all the bells and whistles and Princess accessory details correct. And if a fitter is really busy, has customers stacked up, has an uncooperative horse (or owner ... yes, they do exist) ... it's not that hard to mismark or skip over something. I bust my butt to make sure the template and photos are correct - I'll do a tracing over (and over, and over) if I think something may be inaccurate. And still, I've screwed up. Not very often, and not recently ... but I have before and I'd be foolish to think I won't again.  And when that happens, we step up and make things right.

3) The Horse Went and Changed. As I addressed long ago in the "Timing is Everything" post, horses can change quite radically in a fairly short period, particularly if it a youngster advancing quickly in training, a horse changing disciplines, or a seasoned campaigner coming back from a lay-up. To illustrate, I'm re-posting the photos that went with the "Timing is Everything" entry. This template, of a horse that was coming back into work after a month's lay-off, was taken in Oct. of '08: 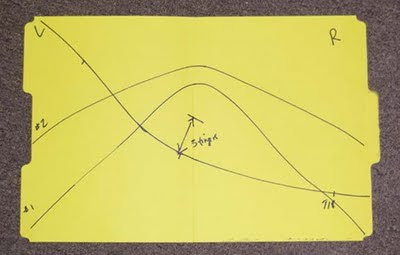 Now, here's a template of the same horse taken in March of '09, after about four and a half months of gentle long-and-low work: 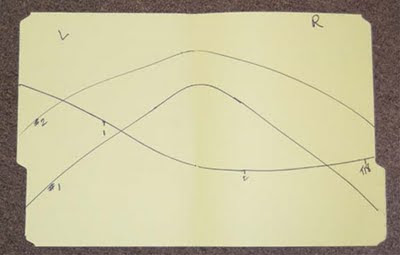 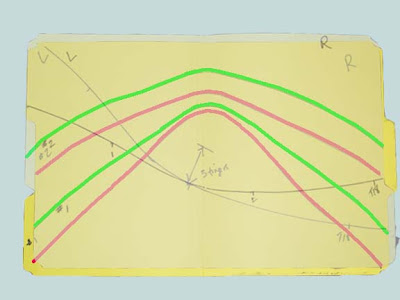 That's a pretty dramatic difference.  The saddle ordered to the back in the first template no longer fit the back in the second template ... but in this case, instead of being a bad fit from the get-go, the horse "grew out of it" gradually, and after the tree was widened and the flocking adjusted, the fit was fine.

4) The Owner is an Unreasonable Lunatic. Again, this is not completely unknown ... but it's very, very rare. Most people are really quite reasonable, and usually, if the customer is unhappy, there's a reason.  And if someone has gone to the bother and expense of ordering a custom (or bench-made) saddle, it's hardly unreasonable for them to expect that it will be to spec, and it will fit.

In any or all of these cases, the best business practice (and the only one that will let me sleep at night) is to take the saddle back. It happens very infrequently - I'd say that over 90% of our bench-made (or custom, or semi-custom ... choose your term) saddles come as ordered and fit well - but it does happen. What's the sense in trying to make a customer keep a saddle that doesn't fit and makes them (and their horse) unhappy? Sure, you may make that one sale, but at some point, "someone" will be willing to step up and tell the world about their experience - and they will be well within their rights to do so.  Word of mouth is one of the most powerful forms of advertising, for better or for worse ... and frankly, that's the sort of press I can live very well without.
Posted by saddlefitter at Friday, December 04, 2009 7 comments: