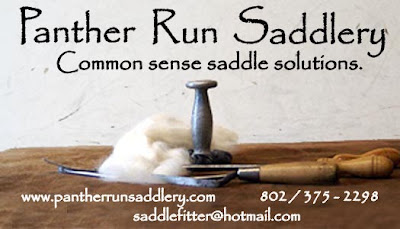 It's a work in progress (the site isn't live yet, but I'll let you know as soon as it's up).  I'll be offering the same services as before: long distance fitting using templates and photos, barn calls, sales, consulting, and reflocks/repairs.  I'll have mostly new saddles at first, though I'll be doing consignments as well.  In the meantime, please feel free to "like" Panther Run Saddlery on FaceBook!

This year has brought some pretty dramatic changes to my life. This summer, we had to put our dear old Tanka dog down due to the infirmities of old age.  Then, Edie passed away on Sept. 20, and my brother-in-law Chris passed away 15 days later - oddly, from  the very same cancer Edie had.  And on Oct. 26th, I learned that as of November 30, my time with the shop will be over.

The owners have decided to move the physical location of the shop closer to their home - understandable, since their commute is about 60 miles one-way.  However, the new location they've chosen puts the shop 60 miles away from me. That would mean that my 40 mile round-trip commute would morph into a 120 mile round-trip commute ... and that ain't gonna happen.  Not for me, and sadly, not for my co-worker Nancy Okun, either - her commute would actually be 12 miles longer than mine.  So as of 5 pm on Nov. 30, after roughly 14 years with the shop, it's officially good-bye.

Change is unsettling, no question - but after the first terrifying, stomach-dropping shock, it often turns out the be just the kick in the ass that was needed.  Since Edie sold the shop in 2009, things have changed significantly; I've become increasingly restless, and have spent more and more time contemplating the possibility of "going independent" and running my own business ... and if this isn't the universe telling me that now's the time to do just that, I miss my guess.

In the years I worked with Edie, I learned about saddle fitting, repair and design ... and I also learned her particular business philosophies, practices and ideals, those specific ingredients that made a little tack shop up over the indoor arena 3 miles off the main road in a town of less than 4,000 people the go-to place for saddles and fitting.  So I'd say that I have a very successful business model to use.  I've also met some outstanding folks in the saddle business who've helped and taught me: Nikki Newcombe, Ann Forrest, Nancy Temple, Patty Barnett, Rob Cullen, John, Gemma and Cassie Hartley, Frank Baines, Victoria Coleman, Mike Scott,  Brita Rizzi and Louise Palmer, to name just a very few, and since they've heard the news, they've been even more kind and supportive.  And since the change has become public knowledge in the saddle world, Nancy and I have had three people very kindly approach us with offers to rep saddles, and we're going to take them all on.  I'll still be taking saddles to barns and traveling to do adjustments; I'll also be working long-distance with templates and photos, and I'll still be writing this blog, same as ever.  I'll also be setting up my own web site, which will have fitting info and - new feature - videos.  In deference to the fact that I need a regular income, I will have to find a "real" job, at least for a while, but my focus will be on getting back into saddles full-time as soon as possible.  I truly love doing this, and don't see any reason I should quit.
Posted by saddlefitter at Sunday, November 11, 2012 12 comments: