In case any of you have spent the last few days away from any sort of news or social media, the northeastern US is supposed to get hit with Hurricane / Tropical Storm Sandy.  The forecast says it will come in from the east, make landfall around New Jersey later today, and run into a winter storm coming in from the west, creating a "Frankenstorm" that could leave the entire northeastern US battered.  Although the main part of the storm isn't supposed to hit Vermont (or even come very close), this is a very big storm - by some accounts, more than 900 miles across - and we're supposed to get high winds, heavy rain and probable power outages.  The wind's beginning to pick up as I write this, and the sky was an eerily beautiful pink/purple at dawn: 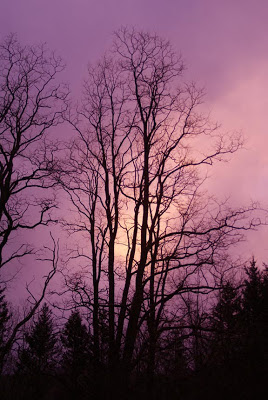 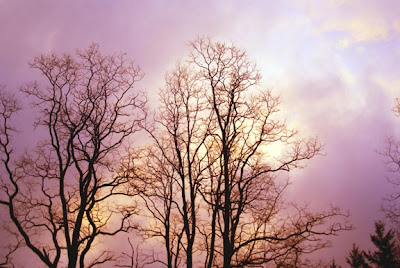 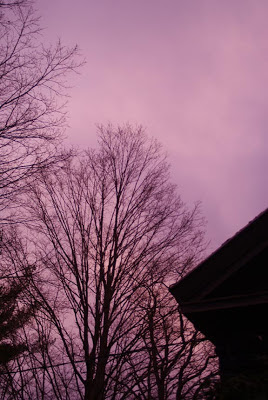 While this storm isn't supposed to create anywhere near the havoc that Irene did last year (though we escaped that totally unscathed, except for an unexpected day off from work due to the roads being flooded), it's still best to be prepared, especially since there's a horse involved.

This entails things like stockpiling about 4 days' worth of water in the horse barn (we have ample water available from the brook below the house, but it's a serious undertaking to get jerry cans up 100' of very steep incline).  We also made sure we have enough hay and grain, and double-checked the fence line.  While flooding isn't a huge concern - we're at roughly 1500' here - the horse barn is at the foot of a hill, and has been known to have a little stream running through it during wet times.  I ditched the paddock and around the barn as best I could; we had plans to have someone come in with a bulldozer this summer and do the job right, but it never dried out enough - and there's so much clay in the soil here so that big machines will slide downhill under their own weight.  I did NOT want a bulldozer pushing my pole barn off the cement piers!

The real concern for us is wind.  We're in the woods, and while the local power company is pretty good about keeping the lines clear, trees do take them out on a fairly regular basis - so being prepared for outages is routine.  We have a wood stove in one end of the house and a fireplace in the other, and about 2 cords of wood at the ready (for those of you who aren't familiar with that measurement, a full cord of wood measures 4'x4'x8').  We have flashlights and lamps (both kerosene and battery), lots of non-perishable foods (for humans, dogs and cats) and plenty of warm clothes and blankets.  We park the cars in as open an area as we can - as you can tell from the photos, we have some very large locusts and maples on the property.  Falling / flying limbs can take out a windshield pretty easily, AND they can take out part of a fence quite effectively, too.  So the mare gets an ID tag braided into her mane just in case - it's a metal key fob; I used my Dremel tool to engrave it with my last name, location and phone number.


Posted by saddlefitter at Monday, October 29, 2012 No comments: