A few days ago, I received an e-mail from a young French blogger/dressage rider named Eugénie, asking if she could translate one of my blog posts into French.  According to her, saddle fitting is something that's "almost unknown in France", and she was hoping to raise awareness, at least among her readership.  I was very flattered - I mean, to me, having people actually want to read my blog is very, very gratifying; so to find that someone wants to go to the effort of translating it into another language is high praise indeed.  I've been visiting Eugénie's blog and having a great time reading through it with the aid of my rudimentary French and a lot of help from Google Translations.  So for those of you who speak the language (or who'd like to get a taste of Eugénie's very personable writing), stop by and take a look:  http://fifikschroniques.canalblog.com/.  Amusez-vous!
Posted by saddlefitter at Thursday, November 04, 2010 5 comments:

The Finite Life of a Saddle

Some saddles seem to last forever.  I've seen some venerable relics some across my bench - Passiers and Frank Baineses and Stubbens of 1970s vintage, some on their last legs, and some still in serviceably sound (though cosmetically challenged) condition.  Eventually, though, they all get to the point of being too old to continue.  Some fall victim to an accident, some are retired when the horse they were used on is sold or passes on, and some just flat wear out.

A saddle's useful life is determined in a large part by three things:  first, its initial quality.  Superior materials and workmanship will create a product that has a far greater chance of standing up to the test of time than inferior material and mediocre workmanship.  The second factor is the use it receives.  As we saw with Jenny Kimberly's saddle (mentioned here), "extreme riding" is hard on a saddle and will effect its lifespan, or at least the lifespan of its components.  The third factor is the care it receives - if it's cleaned and conditioned regularly, has the flocking maintained regularly and is stored in a reasonably protected environment, its useful life will (or should) span many, many years.

But I'll repeat:  even for the most pampered saddle, there will come a time when it's no longer "serviceably sound for its intended use".  Sometimes it's hard to determine when the time has come to retire it ... even for a professional.

This saddle was in the shop on consignment.  It's a Michael Stokes Centaur, made in the UK, a good example of a high-quality saddle that has seen good care, a long life and a lot of use (we're guessing it's at least 10 or 12 years old, if not more). 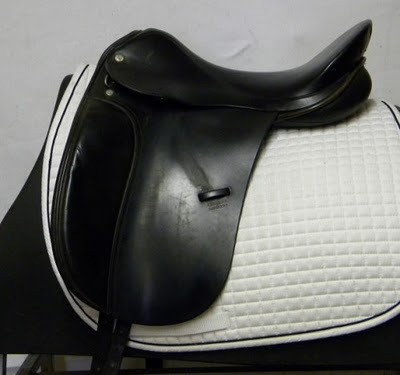 The saddle passed our usual safety check and had gone out on trial about 8 times before the right person and horse found it. But before the sale was finalized, however, the customer wanted me to check the tree. It seems there was a rather unsettling creaking noise ...

Flexing the tree did make it creak, and creak considerably. I dropped the panels and peeled back the gullet cover but didn't find any obvious cracks or loose rivets, and the lower head plate was sound. However, I did find just the slightest give somewhere when I flexed the head plate ... it creaked, but I couldn't pinpoint the cause.  Any sort of give in that area indicates a major safety issue, so I was really determined to find out what was going on. I also noticed that there were two rather significant chips taken out of the tree in the cantle area (though those seemed unrelated to the problem, and I honestly don't know how they'd have gotten there): 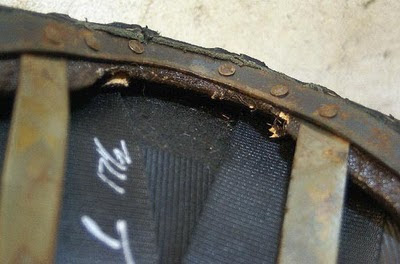 Further staple pulling and leather peeling resulted in some pretty substantial wood chips coming out of the tree: 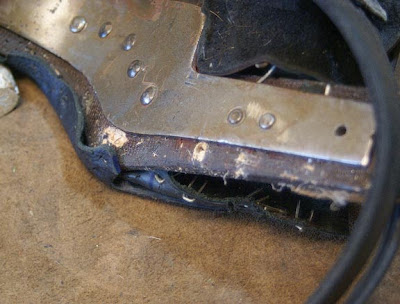 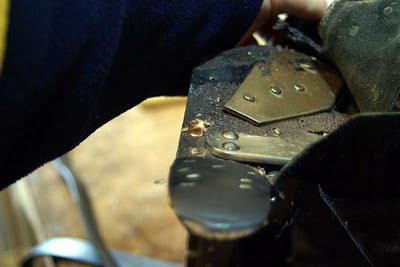 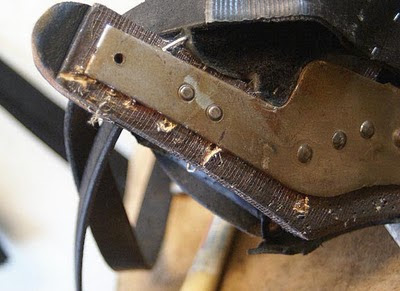 This sort of chipping is not normal when you're just pulling staples.  It really made me wonder about the integrity of the tree (dry rot, perhaps?); you'll often get ugly holes if you're pulling escutcheon pins, but staples usually come out pretty cleanly, leaving only little holes behind.  I was starting to worry about the advisibility of reconstructing the saddle even if I found no major damage ... but I still hadn't found what was causing the creaking noise, so I kept at it.

I pulled the seat foam off the pommel area and started to pry loose the webbing.  The chipping increased quite dramatically in the "high staple" area (you can see a sizeable piece of wood between the legs of the staple near my thumb): 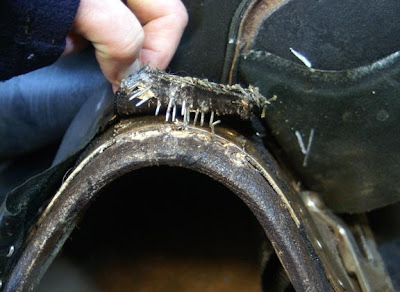 The upper head plate was intact, but when I pulled more staples and peeled back the leather from the rail just above the left stirrup bar, I found the problem: 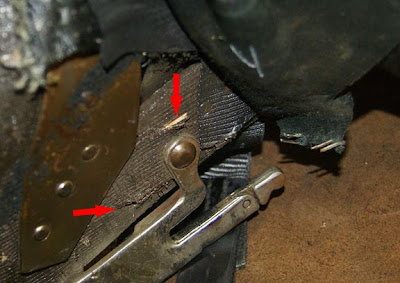 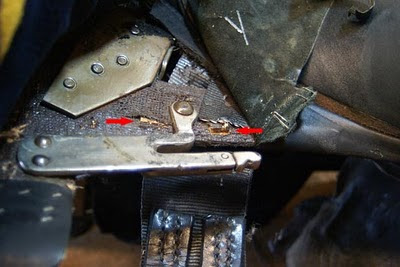 The damage could have come from the stirrup catching on something and the horse pulling backwards / sideways, or it could have just been fatigue from constant use (remember, this is the left stirrup bar).  The right rail was starting to bulge in the same area, though it hadn't actually cracked.  I'm really glad the customer decided to have the noise checked.  Sometimes a creak is nothing more than a loose rivet or the webbing rubbing on something ... and sometimes it's not.  But without dropping the panels and exposing the tree (and sometimes, some determined digging), you can't tell for sure.  Better safe than sorry.
Posted by saddlefitter at Tuesday, November 02, 2010 7 comments: